The sad reality of ESG and Hashtag Activism

Most people are very conscious shoppers. Some people are attracted to the brands; others may be attracted to the bargains. Then others are motivated by the social aspects of a firm and how certain businesses strive to make a positive impact on our society. To a certain extent, we all like Corporate Brands to make positive contributions towards environmental, social, and corporate governance (ESG). For the brands that fall short of their “Corporate Responsibility,” there’s always #CancelCulture.

#CancelCulture is an environment that propagates a social media campaign to either harass or shame a person/institution into changing their behavior, to correct something they did (or change an opinion they hold). The campaign usually goes viral, which ends up ruining a business or someone’s career.

At first glance, forcing institutions to change their behavior sounds like mob rule, but #CancelCulture has legitimate uses. Examples involve television/online personalities Charlie Rose and Roseanne Barr has had their careers ended from due to public pressure due to either insensitive comments or inappropriate conduct [1][2]. Billion-dollar corporations like Facebook have had their reputations tarnished due to evidence of seeing the information/betraying the trust of billions of users [3].

Others involve the campaign #DeleteUber, for choosing not to participate in the taxi strike during President Donald Trump’s Travel Ban saga that occurs in early 2017 [4]. I also can’t forget about #BurnNike, a viral initiative to burn your Nike athletic gear in response to the company’s decision to provide a multi-million dollar endorsement deal to former San Francisco 49ers quarterback Colin Kaepernick [5]. These examples (in my personal opinion) are illegitimate, nonsensical, and a complete waste of time.

It doesn’t stop here. Unfortunately, #CancelCulture becomes progressively dumber; the more people choose to engage in these nonsensical campaigns. These days, people no longer need to be upset about any actions businesses decide to take. Just the mere association of a person, place, or thing is enough to drive people irrational.

If you were fortunate enough to be away from social media on August 8th, you might have missed that a bunch of angry people has decided to cancel their luxurious gym memberships to Soul Cycle and Equinox. This is all because one of their owners has decided to organize an extravagant fundraiser for Trump’s 2020 reelection campaign. You may have noticed that I have used the phrase one of their owners because people tend to use the words owner and stakeholder synonymously.

the gym is my personal hell but if you're a member of Equinox perhaps it is time to say peace(out)-inox ayyyyy I'm still sick yes but fuck equinox https://t.co/SJBsBNXT8Q

Considering Equinox Holdings is a private company, it’s unclear what the company is currently valued at, let alone what stake Stephen Ross has in the company. Nevertheless, Equinox was forced to state the obvious on its twitter page: Stephen Ross isn’t part of the management; is he does not have a majority stake in the company. He is merely a passive investor.

As a passive investor, Ross is most likely not interested in selling his stake in Equinox, so I hope there are plenty of good alternatives to high price gym memberships. I can’t tell if the boycott is simply about raising money for Trump or about being associated with Trump. Nevertheless, Trump/Ross proponents may come to realize that become more ESG conscious may come with some inconvenient realities.

If you’re not careful, you may discover that the company that processes CitiBike accessories also produces peripherals firearms [6]. People may want to start a #boycottlyft campaign on twitter and start using Uber until they realize that Peter Thiel (Donald Trump mega-donor) is still making money from the company [7]. Sure, you can always choose not to ride CitiBike, Uber, or Lyft; that’s a personal choice. However, what do you do when you discover that Koch Industries invests in companies that manufacturer toilet paper [8]?

This finally brings us to the sad state of affairs involving hashtag activism, when our political and social consciousness dictates how we invest. I’m no stranger to different types of investment philosophies. After all, having a philosophy is better than having no philosophy at all. However, an investment philosophy that roots itself in platitudes rather than coherent analysis is doomed for failure.

This is especially true for ESG portfolios.

An Analysis of ESG Funds

Socially responsible investing (SRI) looks broadly at a company’s impact on a range of environmental, social, and governance issues, which makes up the bulk of the ESG market. While impact funds often evaluate companies on a single issue, others may only invest in companies in which women make up a meaningful number of the senior management team and the board of directors. Some funds hold companies with direct involvement in renewable energy sources, such as wind and solar, such as AllanzGI.

The question is of whether ESG funds have outperformed an appropriate benchmark on a risk-adjusted basis has been studied extensively. However, with the recent rise of this cancel culture, I was intrigued by a recent study by Wayne Winegarden, an economist and senior fellow with the Pacific Research Institute (PRI) [9]. 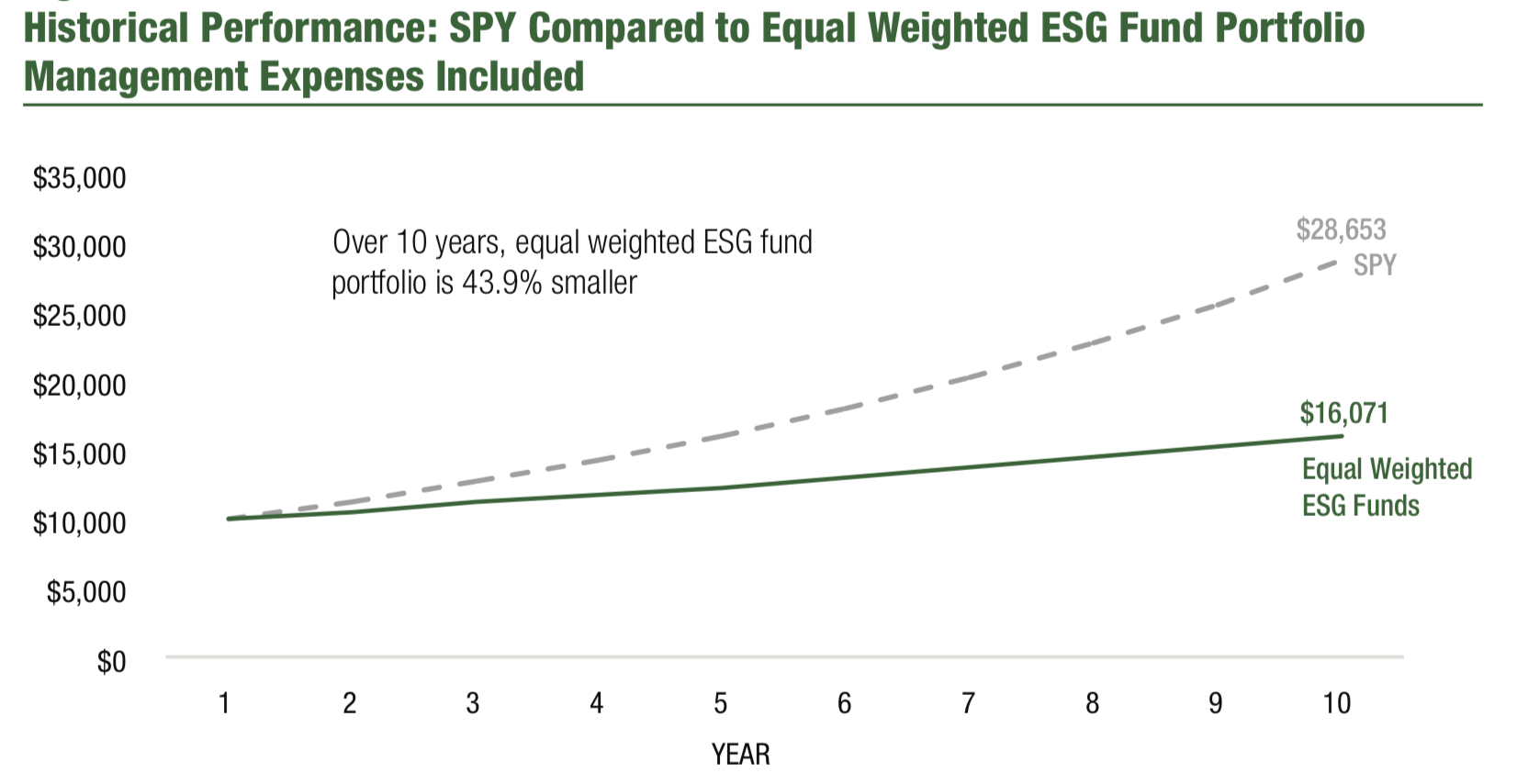 Winegarden methodology involved an analysis of 30 individual ESG funds, 18 of which have a 10-year track record and the remaining 12 of which outperformed the S&P 500 over the recent past. I won’t get into the deals of the individual funds; however, I’ll list the following funds based on their ESG characteristics:

However, there is a small caveat converning the 10-year returns. Over the past 10-years, there has not been a sustained bear market for stocks. The last sustained bear market occured between 2007 and 2009. The study doesn’t take into account survivorship bias, but it isn’t a material part of the analysis.

What is the reason for this underperformance? The answer should be obvious. Following rigorous, selective criteria limits the options for the investor.

Companies that pursue ESG policies may be responsible stewards of the environment and serve the best interest of their employees, and the community should be candidates for portfolio selection. They may also be more profitable and have higher return-on-equity than the average company. However, this does not mean that the stocks will outperform in the long run. For the most part, asset prices move randomly, and the individual characteristics of a company are already reflected in the current share price.

Winegarden cited one interesting factor that could explain why ESG funds tend to underperform. Two companies ISS and Glass Lewis, control approximately 97% of the proxy votes in the U.S. Those firms are biased towards supporting ESG proxy statements, which (according to Winegarden) is supported by the existence of their own ESG advisory services. Many of these ESG issues are supported by neither customers nor employees, which are linked to the financial underperformance of many of these equities. Other examples involve California’s pension system (CalPERS), who said that its divestiture of tobacco companies had cost the system $8 billion.

As long as people choose to be upset about the things that they’re going to be upset about, the state of #cancelculture and ESG investing isn’t going away anytime soon. People prefer to put their money where their mouths are, and for many, ESG is a socially responsible and politically conscious way of being able to accomplish this. At the same time, people shouldn’t be misled by academic studies that claim good ESG policies at the corporate level are correlated with strong company profitability or similar metrics. That says nothing about future stock performance or the performance of ESG funds.

[1] Bill O’Reilly Is Forced Out at Fox News

[6] Biking Accessories Are Also Made From Ammunition Parts